Thanks for Nothing (a Sukkot reflection) 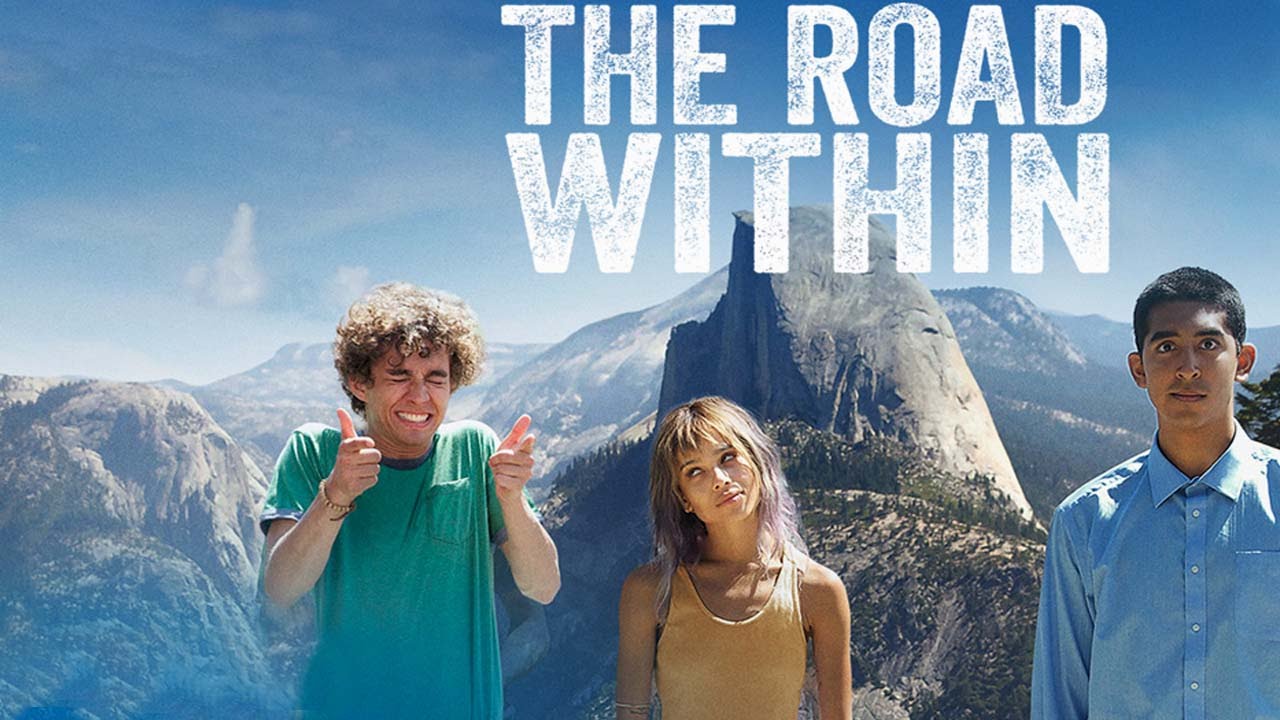 While procrastinating about writing for tonight, I watched what I thought was a pretty extraordinary and wonderful film called The Road Within. Released without much fanfare earlier this year, it’s about three teenagers – one with Tourette Syndrome, one with obsessive compulsive disorder and the third suffering from anorexia – who flee from their residential facility and embark upon the first great journey of their lives. I think what I love about this film is that these three teens, whose medical conditions are typically ones that debilitate an individual’s chance at having any sense of normalcy, set off on a road-trip which not only exacerbates their conditions but liberates them from constant enslavement to those conditions as well. Nothing goes away but, as the characters evolve, each tests the boundaries of what they can achieve in spite of their disability.

We’re finishing up the week of Sukkot, Judaism’s harvest festival and a time during which we wave the lulav, sniff the etrog, and spend time in the sukkah, all to celebrate and express our gratitude for God’s gifts. The ritual for waving the lulav has us do so in six different directions, the purpose of which is to affirm that God’s presence is everywhere, no place is devoid of the Divine.

That’s all well and good when life chugs along without disappointment or pain. And for a while, a lot of us get to live lives like that. But even for the most privileged among us – and by that, I not only mean materially but also physically and emotionally – time comes when we learn our lessons. It may wait til we get old and we learn that old-age hurts; it may come sooner when illness or setback or loss finds us and pushes our lives into a deep hole. But it does come. Eventually, we all learn what it means to live without.

In The Road Within, Vincent, who has Tourette Syndrome, complains, “This <bleep>ing sucks. Can’t I get one <bleep>ing advantage out of this <bleep>ing illness? [My tics] only come when I don’t want them and only in the worst <bleep>ing moments!” But Vincent soon discovers that he can live life, and he can do so with grace, with intelligence, and even with a smile. He may be a fictional character, but I’ve encountered him many times.

Franklin Delano Roosevelt, reelected President so often they had to pass a law to keep that from happening again, was paralyzed from the waist down by polio at the age of 39.

Oprah Winfrey was born in rural Mississippi to an impoverished, teenage single mom. She was raped at the age of nine, pregnant at 14, and lost a son during infancy.

Sylvester Stallone was a forceps-baby, complications from which resulted in the severing of a nerve that caused paralysis in the lower left side of his face, including parts of his lip, tongue and chin. This is what gave him his famous snarling look as well as slightly slurred speech. Truly, “a legend was born.”

And Marc Zupan, a paralympic Gold medal-winner in wheelchair rugby, he’s rock-climbed, sky-dived, and been a guest at the White House.

We all know someone whose life has been destroyed by something that plagued them. But we also know someone who rose above the worst that life had thrown at them, and prevailed. 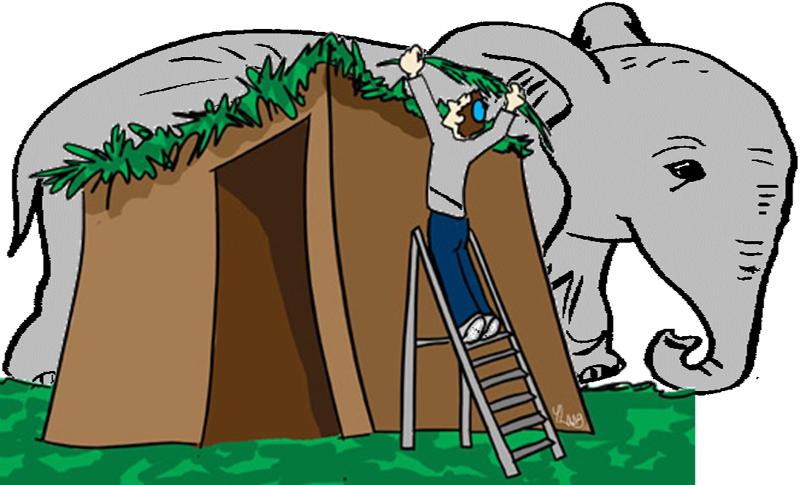 In the Talmud (Sukkah 23a), we’re taught that one may use an elephant as one of the walls of our sukkah. An interesting argument occurs there: “If he used an animal as a wall of the sukkah, Rabbi Meir declares it invalid and Rabbi Judah valid, for Rabbi Meir was wont to say, “Whatever contains the breath of life can be made neither a wall for a sukkah nor a side-post for an alley, nor boards around wells, nor a covering stone for a grave. In the name of Rabbi Jose the Galilean they said, “Nor may a bill of divorcement be written upon it.”

Pretty outrageous stuff, right? But it begs the question why one would even consider using an animal in any of these circumstances. Accusations of exploitation and mistreatment aside, I can imagine someone justifying this because they simply have no other options. And before you start yelling at me that no circumstances can justify mistreating animals, I am inclined to agree. But as often occurs in the Talmud, what they’re speaking about may not be what they’re speaking about.

Sukkot, as I’ve mentioned, is our gratitude holiday, our Thanksgiving. And much as we Americans consider it a fairly sacred national observance to prepare turkey and all the fixings, building a sukkah is the same kind of sacred (in this case, religious) observance for Sukkot. But if for Thanksgiving you can’t afford a turkey, what then? Families try to figure out some way to make Thanksgiving happen, whether it’s getting a turkey through the local food pantry or serving bowls of cereal because that’s all you’ve got and Thanksgiving needs to happen so cereal it is. The issue here, of course, is not Thanksgiving and it’s not the bowl of cereal; it’s continuing food-insecurity in America. When we hear about a family serving cereal for Thanksgiving, or even when we drop off our turkeys here at Woodlands for Hudson Valley Community Services to distribute to families living with HIV or AIDS, our minds (and our hearts) need to go to that next place, that next question: What do I do about the fact that there are people living in my community (in Westchester, for God’s sake!) who have nothing but cereal, or nothing at all, to serve at any meal in their home?

That’s what Sukkot is all about. And what that elephant holding up a sukkah is all about. If we can understand the blessings present in our own lives, then perhaps we can better see and respond to the lack of blessing in other people’s lives. A well-known Hasidic story has a rabbi imploring a very wealthy person to stop limiting their meals to bread and butter alone. “If you can survive on only bread and butter,” says the rabbi, “will you then assume the poor can survive by eating rocks?” Where we have blessing, our appreciation of those blessings can help ensure we don’t miss the blessing that is missing from other people’s lives.

Tonight, we’ve heard from five congregants who have shared their thoughts about the challenge of living these imperfect lives of ours and, despite the difficulties encountered along the way, the desire to (and sometimes, the success at) coaxing a sense of beauty and abundance right there in the middle of it all. It inspires me to hear from fellow journeyers that others are figuring how to feel grateful for life’s goodnesses even while struggling with its adversity.

Earlier this evening, before the Silent Prayer, we read the words of Noah benShea, reminding us that during our efforts to “build a fire” in our lives, we sometimes have to scratch at the ground “hoping to find the coals of another’s fire,” but all we come across are ashes. While some will crumble in despair because no light, no warmth remains, others will be comforted by their understanding that “somebody else has bent to build a fire,” “somebody else has carried on.” That too can be a blessing.

When my son Jonah died at the age of 19, it felt for a while as if my life was over. I was emptied out, broken-hearted and irretrievably lost. In time, however, I began to remember all the goodness that had been Jonah’s life, his antics, his energy, his kindness. And though I will never cease missing him, I will scratch at the ashes on the ground, forever grateful that I got nineteen amazing years to experience him and to love him. Each Sukkot, I remember how he always jumped in to help us build our family sukkah. His spirit was delightful, uplifting and inspiring.

I won’t say I’ve mastered the art of expressing gratefulness for life’s bounty even when that bounty eludes us, but I’ve definitely gotten better at it. And while unfortunately life provides each of us with opportunities to practice gratitude-amidst-hardship, it also showers us with an embarrassing abundance of riches-without-any-cost-other-than-being-human, for which I will always be practicing my thank you’s.

The traditional greeting during Sukkot is “Moadim l’simkha,” which means something like, “May the moments in your life always place you on a path that brings you to a deep, abiding sense of joy.”

P.S. Thank you, Joshua Spodek, for writing about People Who Succeeded Despite Adversity.

And just in case you’d like to read a bit more, here’s a poem written by W.S. Merwin, an American poet who was particularly prolific during the 60s anti-war movement. He lives in New York City and is 88 years old. This is entitled “Thanks.”

To which I add Anne Frank’s immortal words, “In spite of everything.”

← Elul: Preparing to Forgive … Others, and Ourselves
Our Huynh Family →