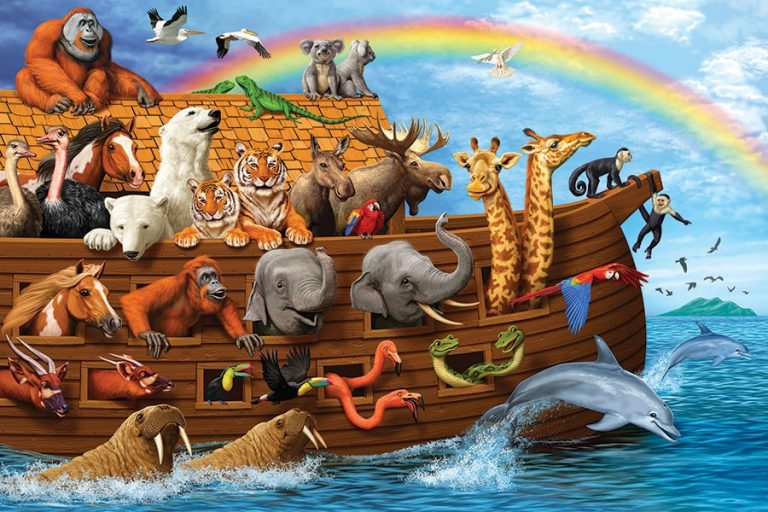 Of all the stories in the Torah, Noah’s is perhaps the most loved of them all. After all, who can resist the image of all those furry, adorable creatures ascending into the Ark, two by two, and living in harmonious tranquility for the duration of that epic boat ride all those thousands of years ago?

Noah and his family have also contributed to that great body of literature known as stand-up comedy. How fortunate we are to have classics such as these:

Noah’s wife, carefully monitoring the animals as they boarded the Ark turned to her husband and said, “I’d feel much safer if those two termites spent the boat ride inside of a metal box.”

And what if the Flood were to happen today? You may or may not recall that God gave Noah a year in which to build the Ark. After the twelve months had passed, God surveyed an empty yard in front of Noah’s house and asked, “Where’s the Ark?” To which Noah replied, “I did my best, but Your construction plans didn’t comply with local ordinances so I had to hire an engineering firm and redraw them. Then OSHA got involved demanding that we install fire sprinklers and flotation devices. My neighbor sued me for violating zoning ordinances by building the Ark in my front yard, and I had problems getting enough wood, let alone gopher wood, for the Ark. The U.S. Forest Service claimed I was endangering the Spotted Owl and I couldn’t convince them that I was saving the owls. Even when I finally got the wood, they wouldn’t let me bring two owls onto the Ark, so no owls. The labor union sued me for not using licensed carpenters. And when I started rounding up the animals, I was picketed by animal rights groups claiming animal cruelty by “imprisoning” (their words) animals on a boat. Then I was told I had to file a large-craft navigation plan and when I sent them a globe, they made me spend a few nights in jail. Now I can’t pay for all the food we’re going to need because the IRS has frozen my assets, claiming that I’m building the Ark to flee the country and avoid paying taxes. I really don’t think I can finish the Ark for another five or six years!”

At that very moment, the sky began to clear, the sun peeking out from behind the clouds for the first time in weeks, and a rainbow arching across the sky. Noah looked up, and with the first glimmer of hope that he’d felt in months, said to God, “Do You mean You’re no longer going to destroy the earth?” To which God replied, “I don’t have to. The government already has.” 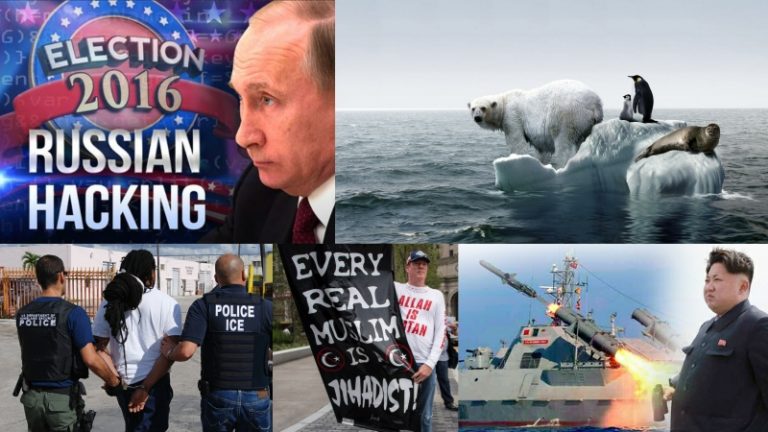 That would be a funnier joke if so many of us weren’t as concerned as we are about the United States government. With issues like North Korea, Russia, global warming, the treatment of Muslims and the treatment of unauthorized immigrants so prominently and disappointingly in the news, it’s understandable when people express dismay to us about what awaits our nation just up ahead.

After forty day and nights of unceasing rain, and a full year of riding on the waters of a deluged planet, when Noah was finally able to disembark from the Ark, imagine what he saw all around him. Even though the future had been saved, even though his Ark contained everything that would be needed to rebuild the world, everywhere he looked was destruction and devastation. No creature save those on the Ark had survived. Plants and trees were only just beginning to grow anew. What do you suppose went through Noah’s mind?

It’s not so difficult to conjure up an image for ourselves. We need think only of hurricane-demolished Puerto Rico or fire-ravaged northern California, and we have some idea of how Noah may have felt as he returned home after the Flood.

It would fall to the next generation to renew their hope in the future. Noah’s children would carry the banner of life into a promising tomorrow. There would be bumps along the way – the Tower of Babel, Sodom and Gomorrah – but there would also be Abraham and Sarah, Isaac and Rebecca, Jacob and Leah and Rachel, all giving birth to three great religions that would at times also stumble but would teach hope and human compassion to the peoples of the world.

Let me share with you a story, first shared with me by my friend, Rabbi Dan Geffen.

In Morocco, a country in northern Africa, there had been a significant Jewish population dating back to the Roman empire more than two thousand years ago. Despite periods of antisemitism, the Jews of Morocco mostly thrived. Even when the Nazis arrived in 1945, Sultan Mohammed V refused to comply with their demands, and protected his Moroccan Jewish community from the Final Solution. It was the establishment of the State of Israel in 1948 that would cause a mass emigration and, by 1967, very few remained. 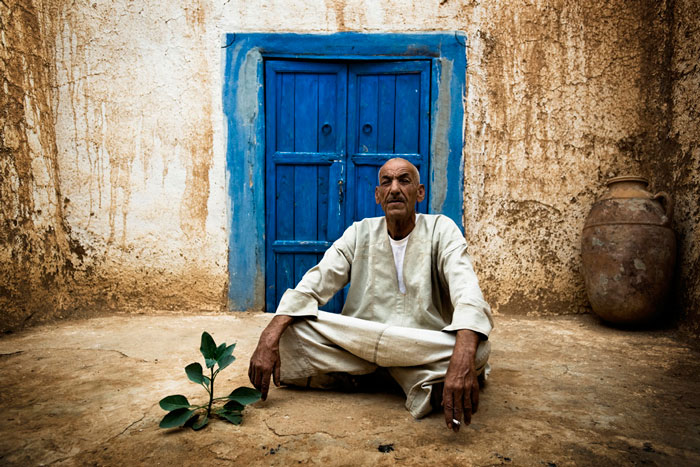 Not too many years ago, a Moroccan Jewish tour guide traveled to a small village called Arazan in order to learn something about the history of the Jewish community there. Upon entering the village, he asked where he could find the local synagogue, but no one was able to tell him. After much searching, he found an elderly Muslim who, upon being asked this same question, reached into his pocket, removed a long, old-fashioned wooden key, handed it to the man and said (in Hebrew!), “Barukh haba … welcome!” And then he said, “Where have you been?” The tour guide, puzzled, asked what the older man had meant. “I have been waiting for you,” he replied, “for more than forty years.” The tour guide responded, “But I’m not even forty myself.” At which point he was told, “When the rabbi left here forty years ago, he gave me this key with the request that if a Jew ever comes to our village and asks for the synagogue, I should give this to him.”

This Muslim had understood that while we are of different religions, we all worship the same one God, and that makes us one family, one world.

It turns out, Arazan was not the only place where such behavior was found. All across Morocco, synagogues and cemeteries have been cared for even though Jews have not been seen there for decades. And while these communities may never see a Jewish presence again, they continue to watch over their brothers’ and sisters’ holy sites.

So in a world where we have to constantly assert that black lives matter, that refugees should be allowed in, that immigrants shouldn’t be kicked out, that girls and women shouldn’t need to proclaim #metoo, let’s remember the monumental decency of good people everywhere who continue to carry that banner of human compassion. Yes, everywhere we look we can see destruction and devastation, but we mustn’t miss the new life that’s blossoming as well, not to mention all of those incredible promises of hope and better tomorrows that walked off the Ark when the Flood had ended. 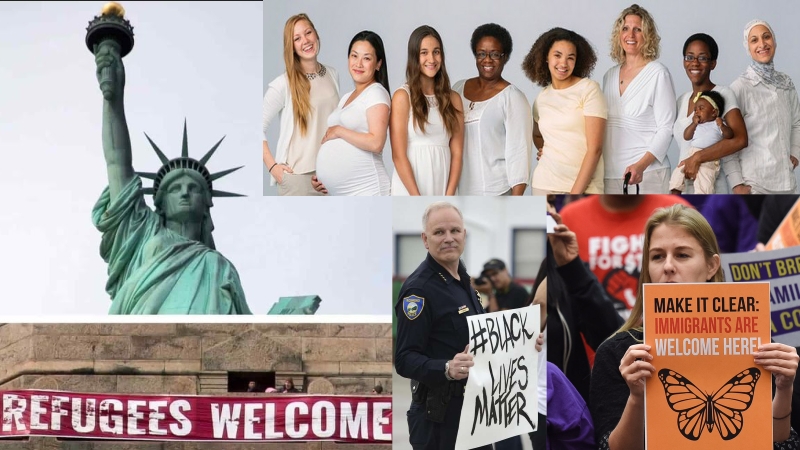 The world we live in is a difficult one. If we teach our children love and a whole-hearted devotion to building something better for their children, there is every reason for us to believe a better day is coming. We mustn’t ever forget Dr. King’s most powerful words, that “the arc of the moral universe is long, but it bends toward justice.”

One last story. Two little kids were discussing Noah and the Ark, wondering about the smell and the noise and the dirt, and who knows what else, that must have resulted from being cooped up there for a year. One of them said, “I just don’t think I could stand it.” The other thought for a minute, then replied, “Well, yes, it must have been awful. But it was still the best thing afloat.”

Eloheinu v’elohei avoteinu v’imoteinu … dear God and God of our ancestors … for thousands of years, You have taught the peoples of this planet about its extraordinary magnificence. And You have asked that we take care of it, the planet itself and everyone and everything that lives upon it. Be patient with us. We won’t ruin it. While voices of arrogance and brutality will have their moments, the arc of the moral universe is long. And your teacher, Reb Nakhman of Breslov taught us it is forbidden to stop hoping. Your world has taken quite a beating in recent times, but so long as there is an Ark in which we can protect and teach our young, we will not let You down. We will not let ourselves down. There are days of brightness up ahead. We will always steer our ship by the stars of goodness and love.

In August, when Hurricane Harvey struck Texas and people’s homes, and maybe their lives, were ruined, stories emerged of people who helped others. As just one example, a man was found clinging to a street signpost, surrounded by flood waters that threatened to sweep him away. When others spotted him, a human chain was formed to help bring the man to safety, just one among thousands, perhaps tens of thousands, of selfless acts during a statewide disaster.

Somehow, when people’s welfare is at stake, there are almost always others who take notice and, even at the risk of personal harm, extend a hand and offer assistance.

This is the world that you and I live in. Not a world of resignation or despair, but one of resilience, of partnership, and of love. Noah may have given up, but we never will. That rainbow in the sky was put there for all of us. Never again will life be given over to destruction and despair.

When you go home tonight, keep your eyes open. You never know who you’ll find clinging to a signpost. Stop to help. You won’t be alone. We’ve got an entire ark full of good people ready to save our world.

← Hurricanes Are Bad for Our National Nastiness
Mentors →