What We Do With A Great Sorrow

It’s been a tough few weeks. A terrorist’s bomb took the lives of five Israelis vacationing in Bulgaria. A lone gunman took twelve more at a movie theatre in Aurora, Colorado. We’ve responded with horror to the news, bereft for the families and friends whose lives have been dealt such a cruel blow by these murders. At the same time, we offer a quiet prayer of thanks that our own loved ones are out of harm’s way. It’s what we do when tragedy unfolds nearby. 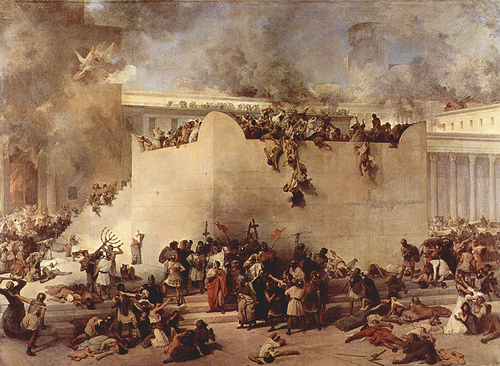 Destruction of the Temple of Jerusalem, by Francesco Hayez

At sundown, Jews across the world began the annual commemoration of Tisha b’Av, the ninth day of the Hebrew month of Av, the day on which both Jerusalem Temples fell and our people, those who survived the bloodbath which accompanied those invasions, were sent into exile, banished from their homes and their homeland, first for sixty years, then for two thousand.

Tisha b’Av arrives as we grieve for our dead in Bulgaria and Colorado. It is also the eve of the London Olympics where, amidst the anticipation and the excitement of the games, a request to observe a minute of silence for eleven Israeli athletes murdered in the Munich Olympics forty years ago was denied by the International Olympic Committee. The political motivations for turning down the request are not my focus here. What moves me is the families of those athletes who, forty years later, still mourn for their children, for their husbands, for their fathers and grandfathers. Grief is not something one checks off a to-do list then moves on to groceries or repairing the roof. Grief can be a lifelong process. Ant it’s not without its own risks. That’s what I want to focus on here.

When my son Jonah died in 2009, I felt as if my entire body had been wrapped in some kind of gauze — light, breathable, but nearly opaque. I could see and hear the world around me, but it had become muffled. I was present, but not fully. Throughout the days following his death, I stumbled through my waking hours, holding onto my family, aware that this community was taking care of us, but lost in the unreality of having to bury my child.

Three years later, most of the gauze has been lifted. My family has recently launched The Jonah Maccabee Foundation, whose aim is to empower young people to create good, whole lives for themselves. It’s an exciting project, with the possibility of doing some real good in the world. At the same time, it takes the grief we continue to feel for Jonah and turns it away from its previous focus on “what was,” and redirects it toward an emphasis on “what can be.” I have no doubt that, in the aftermath of Jonah’s death, I could have stepped away from my life and spent all of my energies on him no longer being here. With the creation of this foundation, it’s not that I’ve stopped grieving, only that I’ve begun channeling it in a new direction.

Sadly, tragedy touches most of our lives. If not a family member, then someone we know well, dies before their time. Illness and job loss can feel like tragedy as well. And when the worst that life can throw our way … does so … we’re faced with a changed game, and a hard choice as to how we’ll proceed. Some of us are able to carry on. Others, not so much. 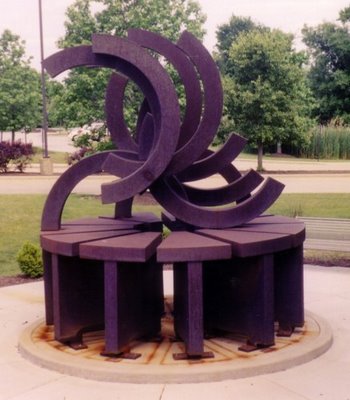 Cleveland, OH, honoring the lives of David Berger and the ten other Israeli athletes murdered by terrorists in Munich 1972. The sculpture represents the Olympic rings, broken into pieces.

One of the Israeli athletes who competed as a weightlifter in Munich, David Berger, grew up in my former congregation in Cleveland. David’s parents were active members and I, a very young rabbi at the time, would catch myself staring at them, wondering how they managed, utterly unaware that one day their shoes would be mine. Today, forty years after the Munich massacre, David Berger is still remembered with love and affection in the Cleveland community and in parts of Israel. There are two BBYO chapters that bear his name, as well as the weight room in his old high school. And a street in Ashkelon, Israel, is named after him.

David’s parents endeavored to take the unthinkable and to use it as a power for good. Our family is trying to do the same. As are countless others, forced into a state of shock by an unexpected tragedy and, when strong enough to do so, determined not to allow that tragedy to become a defeat. Instead, again and again, loved ones take their tragedy, by the throat if necessary, and — whether to keep from losing the vitality in our own lives, or to try and wrest some meaning from the senseless death imposed on someone we love — create something good. It is as if to say, “This person’s life meant so much more than their death. This is the kind of thing they would have done if they were still here.”

The Dubner Maggid tells a parable of a king who owned a beautiful diamond. It was an extraordinary jewel, of rare quality and of which he was justly proud, for it had no equal anywhere. But one day, the diamond sustained a deep scratch. The king summoned the most skilled cutters, offering them a great reward if they could remove the blemish. But none was able to repair the jewel. After some time, a gifted craftsman came before the king, and promised to make the diamond even more beautiful than it had been before. The king entrusted his precious stone into the craftsman’s care. And the man kept his word. With superb artistry, he engraved upon that jewel, around and through the damage it sustained, the loveliest rosebud. He used the scratch … to make the stem.

But our great talent as human beings is in our resiliency and our determination. We cannot remove the lacerations endured when life has gone wrong. But we can, if strong enough, work with them to fashion a new design, one of beauty and of charm. Many an enchanting rose has drawn our attention. How many of those exquisite lives do you think bear as well a deep scratch which tells a sadder tale?

On this Tisha b’Av, this day of remembrance, so many losses come to mind. Some reside more permanently in our hearts, but all move us to sadness, to heartache. Time may lighten the heaviness of these memories, but there will always be moments when we immerse once again into our grief for those we’ve lost.

Tonight, the Olympic games in London have begun. They’ve done so without providing a minute to remember those who died there forty years ago. So let us do the remembering for a minute now. Life will go on. Joy will continue. But in balance with what once was, and now is gone. As it must be.

← Appointment with Destiny
Munich 1972: Remembering for a Blessing →