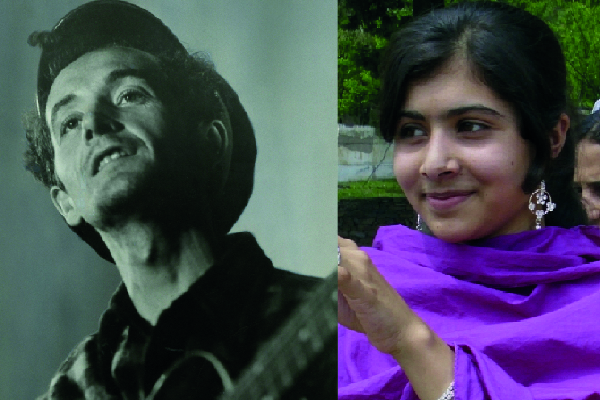 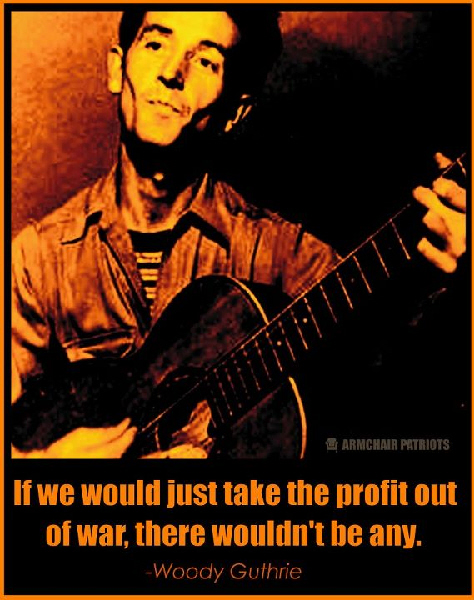 When I was a little kid, growing up in Cincinnati, Ohio, I remember that at Bond Hill Elementary School, in music class with Mrs. Bachs, we used to sing Woody Guthrie’s “This Land Is Your Land.” I’m afraid that, behind her back, we referred to Mrs. Bachs as “Old Battleaxe.” We couldn’t have articulated it at the time but I think we instinctively felt that while there had probably been a time in Mrs. Bachs’ life when she loved teaching children about music, that era had long passed by the time the sixth Dreskin (me) had arrived to her class. So I never found out how important a song “This Land Is Your Land” really was. To me, it was just some old American folksong that we had been forced to sing.

Woody Guthrie, who wrote “This Land Is Your Land,” could have told us that his song is about the America not too many people write songs about. It’s about racism and hunger and greed, about apathy and selfishness and irresponsibility. Of course, several key verses are usually removed from the song, making it sound like a love-song for America. Which it is. But sometimes love includes heartbreak, and Woody Guthrie was heartbroken that the America he loved could be so unkind and so unfair to so many.

You and I know lots of the words from “This Land Is Your Land.”

As I went walking that ribbon of highway,
I saw above me that endless skyway.
I saw below me that golden valley.
This land was made for you and me.

But how many of us have heard this verse?

As I went walking I saw a sign there,
And on the sign it said, “No Trespassing.”
But on the other side it didn’t say nothing.
That side was made for you and me.

In the squares of the city, in the shadow of a steeple,
By the relief office, I’d seen my people.
As they stood there hungry, I stood there asking,
Is this land made for you and me?

Woody would have turned one hundred this past July 14, which means he was born in the year 1912. Woody Guthrie wrote hundreds of songs that have become an important contribution to the collection of American music, not because he was a great composer, but because he sang the poetry he wrote about the America he saw. It was how he spoke out, how he said what needed to be said, how he tried to encourage others to create change.

Woody wrote “This Land Is Your Land” after growing tiring of hearing Irving Berlin’s “God Bless America” one too many times on the radio. Woody thought there were other words that needed to be sung, and that he was going to have to be the person to do it. Here’s Woody Guthrie singing “This Land Is Your Land.” His delivery isn’t exactly the rousing patriotic version we usually hear. And the missing verses aren’t back. But now you know what Woody’s intentions were.

Woody Guthrie had so much to say to us. He cared so deeply about America, and about Americans. He sang of desperation and hope, of hunger and of aspiration. And America heard him; America still hears him.

But Woody Guthrie’s voice isn’t the only one out there. Lots and lots of good people speak out each day about the world they’re witnessing. They see injustice and inequality, and they work to do something about it.

For literally thousands of years, the Jewish heritage has been encouraging us too to speak out, with words like, “Justice, justice you shall pursue!” This vital passage from the book of Deuteronomy (16:20) has, for thousands of years, challenged us to do what we can to see that people are cared for.

Three days ago (on October 9, 2012), we heard about a young woman in Pakistan who was attacked and seriously hurt because she thinks girls should be able to go to school. This is a big, big deal because educating anyone, anywhere, is a threat to people who want to run things without anyone challenging them. Educating girls doubles the number of people who are willing to take a stand.

About a year ago, at the age of only 13 or 14, this extraordinary young woman, Malala Yousufzai, was interviewed by CNN. Her words are fantastic. Her passion is inspiring.

Can we do anything to help? Well, for starters, if we’re in elementary school (or high school, or even college!) we can stop grumbling about having to get up every morning to go and get an education. School is a game-changer, and educated people can transform the world. So kids, go get your education, and then get out there and do great stuff. Fix things that we’ve broken. It’s more important than just about anything else.

Secondly, we can support young people in Pakistan and elsewhere, people like Malala Yousufzai, who want to go to school. One-tenth of America’s foreign aid to Pakistan supports education. $170 million, chump change for the U.S. budget, that can change the world. Don’t let people tell you that America’s foreign aid is a waste of money.

Thirdly, we can visit The March for Education and sign the petition there demanding that the Pakistani government make good on its promise to educate (and protect) every child.

Lastly, send a few dollars to efforts that support Pakistani education. Do it for Malala Yousufzai. While she lays in her hospital bed, you and I can continue her vital work. The American Jewish World Service is targeting donations to provide relief and building projects throughout Pakistan. And The Citizens Foundation, USA, is a Pakistani-based organization seeking to improve the educational opportunities there.

A hundred years ago, Woody Guthrie brought us the gift of starting the work for social change by singing a song. Each of us has that song within us. It may or may not have musical notes. We may sing it through art, or through writing, through dance, or through political advocacy. Woody’s greatest hope was that we’d sing, anyway we can.

He’d have been so proud of Malala Yousufzai. And he’d probably have written a song about her. He’d certainly suggest that you and I do what we can to help.

← Expectant Mother
Into the Fold →