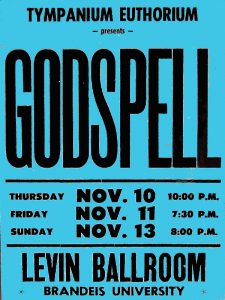 In the fall of 1977, a group of Brandeis undergrads created an extracurricular theater organization which they named “Tympanium Euphorium.” Their first production was Godspell, and opened in the Levin Ballroom on November 10. Directed by David Crane and Marta Kauffman, the show was exuberant and poignant. I played “the Lord” and got to sing “Day by Day” with Ellen. Unbelievable, right?

Each song is available for download (via Dropbox links below), as are the entire recorded acts (also via Dropbox). The sound’s not so good, but there’s enough there to either take you back or (if you’re the offspring of one of those folk) to get an idea of what we poured our souls into while in college. We were very lucky to have each other to help make our college years as wonderful as they very much were.

Photos for your enjoyment (and downloading) are here.