There’s a story about a kid named Sammy who was walking along feeling sorry for himself because his family had recently moved to a new town, he hadn’t made any friends, and his parents seemed to be busy all the time. So when he saw an adult kneeling on the ground searching for something, he tried to tip-toe around the other side. There’s nothing worse when feeling sorry for yourself than some adult asking you to be useful. But as he passed the man, he saw a white cane on the ground and realized the man was blind. So down Sammy went and, together, they searched for the man’s lost key. Finding it, the man said, “Thank you. When you walk in the dark, sometimes you forget how kind people are.”

“I think I was lost too,” said Sammy, realizing he’d been lost in a locked-up world inside his head and heart. But now, as they walked together, Sammy knew his loneliness was growing smaller and smaller.

When we’re young, we’re at the center of our universe. We look out for our self. This is where learning begins. We discover where our self ends and the rest of the world asks things of us. In time, we slowly learn to reach out beyond ourselves and care for others. Often this blossoms during adulthood but, from time to time, it starts earlier. And sometimes the results can be astounding … and inspiring.

In November 1991, thirteen-year-old Elana Erdstein was visiting her grandmother and noticed a basket overflowing with toothpaste, soap and shampoo samples, all collected from many hotel stays. Elana began thinking about other travelers who probably had similar baskets stowed away, and having been encouraged by her synagogue to engage in a socially responsible community project enroute to her becoming a Bat Mitzvah, Elana began collecting supplies from others in her community. Boxes were set up at the library, the JCC, and houses of worship all over town. Ultimately, Elana collected 25,000 items, all donated to organizations that could get them into the hands of the needy. Elana said, “I learned that one person, even one who can’t drive yet and only has allowance and babysitting money, can make a difference.” Today, Elana’s a Reform rabbi at my childhood synagogue in Cincinnati, Ohio, continuing to make a difference in a whole lot of people’s lives.

In the 1990s in Homer, Georgia, when the doors to the new courthouse opened to the public, the old courthouse was scheduled for demolition. Sixteen-year-old John Clark Hill loved that old building and took action to save it. He wrote to local newspapers and gave speeches before any group that would listen, pleading for restoration. Today, that old courthouse, which John and his friends saved, houses art exhibits, a genealogy library, and serves as a civic center for plays and concerts. And Dr. J. Clark Hill lives in Commerce, Georgia, where he not only provides medical care but has served as mayor for the last seven years. 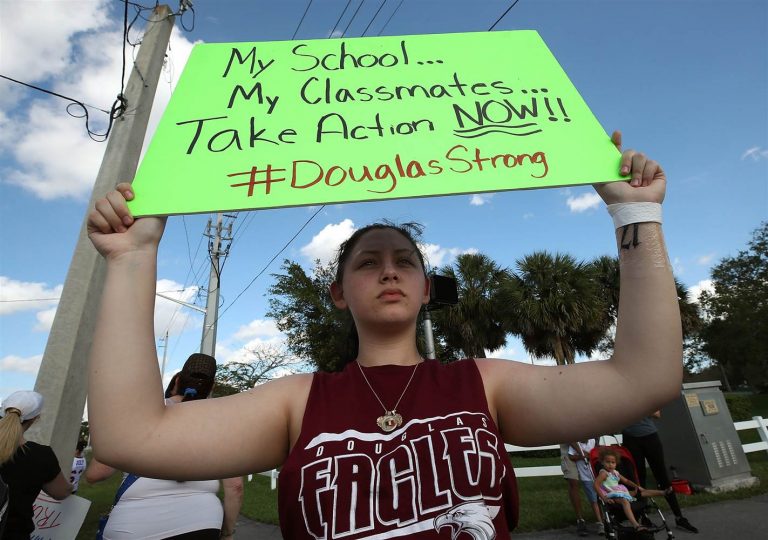 After the tragic events at Marjory Stoneman Douglas High School in Parkland, Florida, students there and across the country have had enough. They’ve walked out of classes, stopped traffic, and made speeches calling on leaders local and national to finally do something about guns in this country. The conservative right-wing immediately set out to discredit them, even claiming they were actors hired to criticize second amendment rights. In words that could only have come from a teenager, 11th grader Cameron Kasky told CNN, “If you’d seen me in our school’s production of Fiddler on the Roof, you’d know that nobody would pay me to act for anything.”

This week, the Florida legislature passed a bill that imposes a three-day waiting period for most purchases of long guns, and raises to twenty-one the minimum age for purchasing those weapons. It provides nearly $100 million to improve school security and $67 million to fund a new sheriff program allowing school districts to voluntarily train and arm employees who do not exclusively teach in the classroom.

The legislation is modest. But it represents one of the first times that the voices of the NRA haven’t stopped a piece of legislation in its tracks. It’s a start. And that’s a great thing.

I couldn’t be prouder of the young people who stood up to demand that something change. And I pray, really, I pray that they will have the staying power to become the thorn in the side of our leadership that this country desperately needs. On Saturday, March 24 – our holy Sabbath, mind you – I urge you to support these kids who are organizing to march here in New York and down in Washington. Find a way for your own kids to participate. And write checks. Lots of them. Allowance and babysitting money might not be enough for this particular extracurricular activity.

Do you know the story of Bil-ahm’s donkey? Bil-ahm was a fortune teller, perhaps a prophet, but it’s his donkey that saw an angel and delivered God’s message. The donkey, not the prophet. The donkey! Considered to be among the least intelligent members of the animal kingdom, it’s the donkey who teaches a lesson to the man.

Great feats being performed by unexpected individuals is always surprising. Are not teenagers the donkeys of human civilization? And yet, here they are, working to make a difference in our world. And succeeding. Youth are perhaps the greatest source of unexpected contributions to society. A young girl in Canada began a recycling program that spread across her entire province. A 16-year-old boy invented a sophisticated piece of biomedical technology that’s used in hospitals to monitor heart conditions.

I don’t know what will come of these young people working to pass gun laws that will make our schools and our neighborhoods safer. But I do know two things. First, they deserve to be supported. They deserve to hear from the people they love and respect that we think they’re doing a great thing. And second, watch where they go. Some of these kids will stay the course and remain involved. And like those kids whose stories from twenty-five years led them to civic leadership today, some of these stories will lead to a lifetime of community service as well. God, I hope they change the gun laws! But if all they do is learn that there’s a world bigger than themselves out there, and that they can play a role in making it a little better for others, that’ll be plenty.

In the meantime, let’s be good allies. And who knows? Maybe we will get safer schools for them. But if not for them, then maybe for their children. If the course is a long one, and they want to stay on it, let’s do all we can to support them, now and always.

Shmuel Yosef Agnon, who wrote modern Hebrew fiction, penned a story called “The Kerchief” in which a young man’s mother, on the day he becomes a Bar Mitzvah, gives him a beloved kerchief as a token of her love. Later, as the boy returns home from temple, he passes a homeless person with outstretched swollen hands hoping for a bit of money. Having none, the boy hesitantly binds the person’s wounds with his mother’s kerchief. Apprehensive that his mother will be upset at his giving away her gift, he returns home only to find love in her eyes as she reassures him that his compassionate act was his initiation into adulthood.

With Purim only a week behind us, our holiday of fantastical stories where unlikely heroes save the day, may each of our lives be filled with people who perform unexpected acts of goodness. We’ve seen donkeys granted audiences with angels, and beauty queens muster the courage to speak truth to power — why not children who change our nation’s laws? Stranger things have happened, but none more important or more urgent.

In 1983, an 11-year old kid from Philadelphia named Trevor Farrell saw a news report on television describing the lives of people living on the streets of his town. Trevor asked his parents if he could bring the people on the streets some coats and blankets, to which they agreed. A few days later, Trevor was still handing out coats and blankets, now collecting them from his neighbors. Soon after that, people from all over his town were stopping by Trevor Farrell’s home to drop off coats and blankets. Nine years later, Trevor had opened a shelter for the homeless in his town. And today, a non-profit organization called Trevor’s Campaign is celebrating 32 years of advocacy to improve lives the of families in Philadelphia.

Children are children. They’re sweet, adorable, honest, uninhibited, and sometimes quite outrageous. Sometimes, as they grow up, they become kids of action – looking at their world, seeing a problem, and trying to fix it. These children do their parents proud. They do us all proud. May our world be filled to overflowing with them.

← Celebrating Purim in the #MeToo and Post-Parkland Era
Where Was God Then? Where Is God Now? →