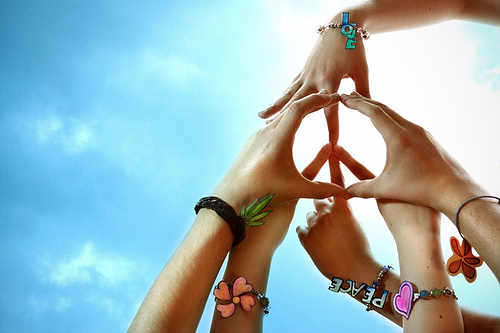 Thanksgiving weekend. An embarrassing overabundance of food, of football and of shopping. What’s not to be thankful for? Well, perhaps for one more gift: that Thanksgiving seems to be the most uncontroversial moment in America. Everybody celebrates it. Nobody complains about it. And even though there are, undoubtedly, differences from house to house in how it’s observed, we make ample room for all 315 million of us to share it.

In the Dreskin home, we’ve grown accustomed to Ellen’s expectation that, before we eat, we each share something for which we’re grateful this year. I never quite give enough thought to my response, but I try to hit all the right ones: family, shelter, and good health. But left off my list last night, I add this one now: I’m grateful the bombs have ceased flying from Gaza to Israel and vice-versa.

While the response from Israel lasted one week, the 2256 rockets launched from Gaza began last New Year’s Day and continued for 47 weeks. When Aiden arrived home this weekend, he mentioned to me that he’d seen a political cartoon in which the first three panels showed rockets fired at Israel, but not until the fourth panel, when a rocket is fired at Gaza, does the news media file a report, “Israel attacks Gaza.”

In no way do I mean to minimize the rain of destruction in Gaza from this past week’s retaliation. 162 Gazans died there. Roughly half were civilians. This should be unacceptable to Israel. Except that after 47 weeks and 2256 rockets, Israel’s patience had worn thin. I’m amazed it lasted as long as it did.

As of Wednesday, a cease-fire has begun and, thus far, is holding. The question, of course, is, “What now?” More than likely, it will be business as usual. Unsuccessful overtures of peace. Resumption of life in both Gaza and Israel. No success at shaping any lasting treaty. A begrudging quiet until the next violent action from within Gaza. And one sort of response or another from Israel.

But there’s always a possibility, isn’t there? Remote and unrealistic as it is, there does exist the slightest chance that the United States and Egypt and other parties of interest will push Israel and the Palestinians to finally settle this thing. Imagine that … a secure and lasting peace for all. No more rockets. No more occupation.

For the past four years, a small column has appeared each month in our temple bulletin, called “Just Israel.” The idea behind it has been to demonstrate to our liberal, unwilling-to-simply-serve-as-a-cheering-section-for-Israel selves to see that there is, and has been for a long time, movement toward normalization and peaceful relations between individuals in Israel and individuals in Gaza and the West Bank. We’ve written in this column about shared ventures between the two lands in the development of software, of music, of agriculture, of medical research, renewable energy and much more. While the conflict fills the headlines in our news media, we want to share and to applaud the truly important work which happens at non-governmental levels and demonstrates the profound yearning for peace that pervades both peoples despite sensationalist news reporting and political hand-wringing.

I’m an eternal idealist. Frankly, I’ve no interest in being anything else. There’s too much wrong with the world, and too many decent people who would unhesitatingly change everything in the name of peace, for me to be anything else. I’m not unrealistic. I fear for the cease-fire and what will follow it. But my heart won’t ever cease firing its own rockets of hope. I know that people are always capable of creating peace. And I know there are people of wealth and power who stand to lose much if peace breaks out. But I don’t know of any oppressive time in history, any bleak period of violence, that didn’t end with liberation and reconciliation. Sometimes — often — these are a long time in coming.

Arabs and Jews have been at each other’s throats for thousands of years. Our epic stories record this. Cain slays Abel. Jacob pursues Esau. Israel defeats Amalek.

But I’m ready to write a new story. I’m eager to begin teach a new generation of students how the old Bible stories seem so unrealistic because such enmity ended so long ago.

Rabbi Israel Salanter, who lived and taught in 19th century Lithuania and Prussia, once noticed that a fancy restaurant was charging a huge price for a cup of coffee. He approached the owner and asked why the cup of java was so expensive. After all, some hot water, a few beans and a spoonful of sugar could not amount to more than a few cents.

The owner replied, “You are correct that for a few cents you could have this same coffee in your own home. But here in the restaurant, we provide the extras — exquisite decor, soft background music, professional waiters, and the finest china from which to drink your beverage.”

Rabbi Salanter’s face lit up. “Thank you so very much! I now understand the blessing which we recite before drinking water, Shehakol Nih’yeh Bid’varo – ‘Blessed are You, O God, for creating everything by Your word.’ You see, until now, when I recited this blessing, I had in mind only that I am thanking God for creating water. Now I understand the blessing much better. Everything includes not merely the water, but also the air we breathe, the beautiful world around us, the music of birds that exalt our spirits, the charming flowers with their marvelous hues, and the fresh breeze that cools us in the heat of the day. For all this, when we consume our beverage, we must also give thanks.”

It was a fearful time in both Gaza and Israel this past week. Sirens in Tel Aviv and Jerusalem, usually a safe distance from hostilities, caught its residents with surprise and apprehension. The leaflets which Israel dropped over Gaza, warning its citizens that bombs were coming and that they should find shelter, could not have made the Gazans feel safe. But both sides celebrated the cease-fire. And while we here in America heard about the politicians’ satisfaction, you and I both know how comforting it must have been for mothers and fathers to be able to tuck their children into their own beds on Wednesday evening, and to have a quiet moment of rest and soft conversation outside of their homes, watching a sky that was lit up only by the moon and the gentle twinkling of stars. You can bet there were imaginings, and hopings, and prayers on both sides that evening, expressing how lovely it would be to have a lifetime of evenings like that one.

There is much to be thankful for this Thanksgiving, with this cease-fire. For every life saved, acts that are implied by but not expressly indicated in the terms of the agreement, we offer our thanks. Just as there is more behind a cup of coffee than we immediately perceive, so too with a cease-fire. Tens of thousands of families (and all of their friends across the globe) breathe easier, both in Israel and in Gaza, because of it.

There is much hard work ahead. The people must push their representatives to become disciples of Aaron, and to pursue peace. This is a complicated, even dangerous, path for leadership to take. And so those who have the most to gain from peace – among the Gazans, among the Israelis, among Americans, and among us who yearn for such a seemingly impossible but cherished goal, we must not let up in our calls for peace, not until our leaders turn and follow us.

On Facebook, a statement, issued by a group in January 2011 called “Gaza Youth Breaks Out,” has gone viral, meaning it’s become wildly popular. Representatives of “Gaza Youth Breaks Out, write, “We are a group of young people living in Gaza facing different kinds of violence everyday. We are looking for change in our country and are trying to taste peace.”

Here is a brief excerpt from their statement.

We, the youth in Gaza, are so fed up with Israel, Hamas, the occupation, the violations of human rights and the indifference of the international community! We want to scream and break this wall of silence, injustice and indifference. We are sick of being caught in this political struggle; sick of coal dark nights with airplanes circling above our homes; sick of innocent farmers getting shot in the buffer zone because they are taking care of their lands; sick of bearded guys walking around with their guns abusing their power, beating up or incarcerating young people demonstrating for what they believe in; sick of the wall of shame that separates us from the rest of our country and keeps us imprisoned in a stamp-sized piece of land; sick of being portrayed as terrorists, homemade fanatics with explosives in our pockets and evil in our eyes; we are sick and tired of being kept in jail by Israel, beaten up by Hamas, and completely ignored by the rest of the world.

We are youth with heavy hearts.

This is the Gazan youth’s manifesto for change!

We will work day and night in order to change these miserable conditions we are living under. We will build dreams where we meet walls.

Eloheinu v’elohei avoteinu v’imoteinu … our prayer on this Shabbat is a simple one. May these words — of young men and women who have been locked inside a cheerless parcel of land plagued forever by violence and captivity from cowardly leaders both inside and outside of their land — may these words, demanding a child’s right to grow up in a home that is safe and that prospers from joy and from love, may these words be on all our lips. May their prayer be our prayer. And may the day soon arrive, when we can embrace one another in celebration of an impossible dream … that has come true.

← Into the Fold
On “Human Rights Shabbat,” the Night Before Hanukkah →