Last weekend, Ellen and I traveled northward to Buffalo where Ellen was officiating at the 2nd wedding ceremony of two very dear men who wanted to marry under the newly-legal auspices of New York State. We joined them on a small boat that travels the famous lock-system of the Erie Canal. Ellen presided over the re-union of the two gentlemen while the boat was being lifted in a lock from one level of the canal to another. It was a beautiful, touching, incredibly loving celebration that, for many of us, was enhanced by the excitement, if not the symbolism, of rising up with the waters beneath us.

Afterwards, as the boat ride continued, family members handed out words to a Bruce Springsteen song about the Erie Canal. As they taught it to us, I couldn’t help but laugh, knowing that I had learned this song when I was maybe ten years old and Bruce was just learning how to play guitar.

It was written in 1905 and recalls a time when mules walked along the shoreline, pulling the barges along the canal. I happen to know this because, growing up in Cincinnati, it was perhaps the only part of the social studies curriculum that actually caught my attention. Why we studied a New York waterway in Ohio, that I never understood until I looked it up on Wikipedia this week and learned that my teacher had probably tried to get me to understand that Ohio also had a canal system that formed, along with New York and Pennsylvania, what must have been America’s “super-highway” system of the late-19th and early-20th centuries.

Riding that little boat through the old locks, albeit sans mule, was for me a nostalgic journey that filled my mind with wonder and my heart with a certain satisfaction that comes from climbing into one of those boats that had been described to me more than fifty years ago. I bet I’d ace that quiz if I could just take it once more.

Memories are an important part of what makes us who we are. Without memories, not only would we lose much of our personality, but we’d also be far less able to make good decisions about nearly anything. We wouldn’t know what tastes good to us. We wouldn’t know with whom we enjoy spending time, or how we enjoy spending time. And at a meta-level, without memory, our communities would be unable to learn from previous experience and prepare for what awaits us all down the road.

Part of the conversation taking place right now is how the city of Houston could have been so unprepared for the waters of Hurricane Harvey when, back in 2008, Hurricane Ike killed nearly a hundred people and caused $30 billion in damage. It was a dress rehearsal for Hurricane Harvey, and yet little was done in the years since. So while Houston has been experiencing incredible economic growth, it has also erased marshland after marshland, leaving few escape routes for the eventual floods that were coming. They were sitting ducks, they knew it, yet did nothing about it.

We’re all familiar with George Santayana’s prediction that “those who cannot remember the past are condemned to repeat it.” But what about those who do remember the past and ignore it? Same thing, I guess. Except for the added characteristics foolishness and arrogance.

Rabbi Abraham Joshua Heschel taught, “The past defers to the future, but it refuses to be discarded. Only he who is an heir is qualified to be a pioneer.”

We learn perhaps the same lesson from the 25th chapter of Deuteronomy, in which the Israelites are told, “Remember what Amalek did to you on your journey out of Egypt, how, undeterred by the fear of God, he surprised you on your march, when you were famished and weary, and cut down all the stragglers in your rear. When God grants you safety from all your enemies around you in the land that God is giving you as a hereditary portion, you shall blot out the memory of Amalek from under heaven. Do not forget!”

I suspect that “blot out the memory of Amalek” means precisely the opposite of how it sounds. Do not forget Amalek. Ever. And if he should reappear, remember what he did to your ancestors and act to prevent it from happening to you.

Memory is supposed to be our teacher. But like I tuned out during social studies and only learned a portion of what was being offered to me and to my fellow students, history – whether it’s retelling the story of a fascist dictator, or recounting the devastation caused by weather patterns (that are patterns, folks, and they will return) – there’s great wisdom in the past. It can help us determine best avenues for the journey ahead. But only if we study it.

I’m reading Dandelion Wine, one of the great narratives by Ray Bradbury of Fahrenheit 451 fame. It took a while for me to start enjoying it. I turned that corner when I realized that, with each chapter, the author was drawing these remarkable pictures of small-town life in 1930s America. And while these are not my memories, I’m loving the neighborhoods which Bradbury has invited me to visit with him.

Nostalgia is defined as a sentimental affection for the past. This visitation through Bradbury’s writing to Green Town, Illinois, may seem like it’s just for fun. But the author’s intentions go further. Bradbury wants to teach us about fears that we all must, at one time or another, face, and about the acceptance that is sometimes all we can offer in the face of our inability to change where things are headed. Memory may not provide the tools to win, but it can give us enough knowledge to equip us to live as gracefully and gratefully as possible. Technology, for Bradbury, is both the way forward and a door that sometimes shuts unceremoniously on ways of life that we have loved and must increasingly leave behind.

I have occasionally engaged in grieving for the ridiculous. A television series that’s come to an end. A food I can no longer find in the grocery store. Even this past summer, when a flood in my basement destroyed items long-stored, I was saddened to lose possessions that neither Ellen nor I were ever going to use again.

Still, those memories are pleasant ones. And life ought to include unsubstantial acts that bring us a bit of joy and contentment. We can’t always be saving the world. As Ray Bradbury would suggest, everyone should take the time to make some dandelion wine, that is, to capture one’s best summer memories in a bottle and, when winter has frozen the world around us, head down to the basement and take a sip every now and then to remember warmer times.

In this week’s parashah, Kee Taytzay, there is a passage in the 21st chapter of Deuteronomy (v14) about what to do with the women you capture when you’ve been victorious in battle. Apparently, you can bring one home to mom and dad, and make her your bride. Then, and I now quote, “Should you no longer want her, you must release her outright. You must not sell her for money. Since you had your way with her, you must not enslave her.” 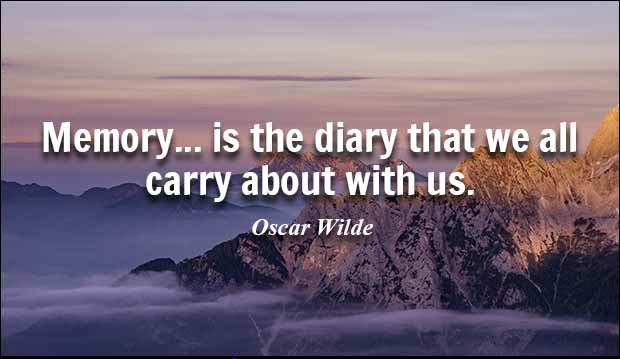 Setting aside the awful way that people in the past, our ancestors included, sometimes comported themselves, I found myself reading this passage as if it were about memory. “Should you no longer want them, you must release them outright.” Some memories need to be let go. Their pain debilitates us and we are continually diminished by them. I’m thinking of memories about terrible ways some have been treated, and how long the memories of such moments last. Their pain can continue for decades. To move forward in a life that has been bruised by such experiences, it might be better to let go of these memories. To leave the traumas behind. Since there’s nothing but anger to fuel the way forward from them, it is better perhaps to abandon both the narratives and the emotions that go with them. We ought neither enslave those memories to us, nor become a slave to them.

It is the month of Elul. In three weeks’ time, we’ll gather here for our annual Days of Repentance, of turning, of doing the work to make our and others’ lives better. For that period of reflection to be a successful one, we are called upon to look back at the year just ending. We think of our actions, our deeds, where we stood tall and where we demeaned ourselves in order to engage in the unimpressive deeds that should be beneath us. But first comes memory. For memory is a sacred act. It is a holy act. During this High Holy Days season, may we do our remembering with humble yet insightful recognition that where we’ve been is a precious asset. For out of our past, we can plan a better future. In the new year 5778, may we succeed in making that so.

← Eclipsing!
Hurricanes Are Bad for Our National Nastiness →