Are Things Getting Better or Worse?

I wrote this piece for Shabbat Eve at my synagogue on January 9, 2015. The massacre at Charlie Hebdo in Paris had recently occurred, as had the death of our dear family friend, Susan Sirkman. It seemed like the right time to bring those two events together in a presentation about where our world is headed.

Pop quiz! I know it’s Shabbat. I know you like to sit there and not be singled out during services. And I know the last thing you want is to be graded for your performance during a service. Oh well.

Question #1. Just answer it in your head. How did the number of deaths per year from natural disaster worldwide, how did that change during the last century? Did it more than double, did it remain about the same, or did it decrease to less than half? Answer in your head: A, B or C.

Question #2: For how long did women throughout the world who are now 30 years old, knowing that men of the same category went to school for an average of eight years, for how long did this group of women go to school? Seven years, five years or three years? Answer in your head: A, B or C.

Question #3: In the last 20 years, how did the percentage of people in the world who live in extreme poverty change? Extreme poverty, meaning “not having enough food for the day.” Did it almost double, did it remain more or less the same, or was it reduced by half? Answer in your head: A, B or C.

And our last question, question #4: What percentage of the world’s one-year-old children are vaccinated against measles: 20%, 50% or 80%? One last time, please answer in your head: A, B or C.

Okay, honor system. Here are the answers. Grade yourselves.

For question #1, deaths from natural disasters throughout the world, you can see it from the graph here, from 1900 to 2000, that in 1900 there were about half a million people dying each year from natural disasters: floods, earthquakes, volcanoes, droughts and more. How did that change by the time we entered the 21st century? Reduced by more than 80%. Not that there are fewer disasters, but that our ability to respond to those disasters and to bring help has improved mightily.

For question #2, women in school, men, on average worldwide, attended for eight years. Women, for seven. Yes, it should be as great as for men, but it’s not nearly as awful as we might have thought. And while there are certainly places where girls have great difficulty getting to school and are prevented from going altogether, in the majority of the world girls today attend more or less as long as do boys. That doesn’t mean there’s gender equity, but very likely it’s better than you or I imagined.

Question #3, what percent of the world is living in extreme poverty, that number has been reduced by 50% in only the last 20 years. Fifty percent! So many of us believe we can never end extreme poverty, and we aren’t even aware of the progress that’s taken place!

And finally, question #4, measles vaccinations. More than 80% of the one-year olds across the globe have been vaccinated. That’s a lot fewer dots the world has to contend with. And while the World Health Organization still lists measles as one of the leading causes of death among young children, the number of those deaths has been dropping rapidly.

The slides you’ve seen here come from a TED talk presented by Swedish global health expert Hans Rosling and his son Ola Rosling who directs the Gapminder Foundation, an organization that promotes sustainable global development through increased use and understanding of data. Needless to say, Rosling and son are quite optimistic about the possibilities for future progress, and so am I.

I’m no Pollyanna I know there’s a lot of ugly in our world. Just this week, we saw terrorism once again inflict horror in Paris. We hear about hate-filled violence and we can’t help but wonder what this world is coming to. But it is precisely at moments like these that we also hear about the people who open their hearts, their hands and even their homes to others in need. When the café in Australia had been taken over by Muslim extremists, there was concern of a backlash against Australian Muslims in general. But then, the story is told, a passenger on a commuter train spotted a Muslim woman removing her hijab, ostensibly out of fear of being targeted. The passenger told her to put it back on and offered to walk with her in solidarity. And thus, #IllRideWithYou went viral as non-Muslims condemned Islamophobia and stood by their neighbors.

This week’s parasha, Shemot, continues the story of Joseph and his brothers down in Egypt. After generations of cordial relations between the Hebrews and their Egyptian hosts, va-ya-kom me-lekh hadash al Mitzrayim a-sher lo ya-da et Yosef … a new king arose over Egypt who did not know Joseph. And with that, another tragic chapter in Jewish history began, the enslavement of our people in ancient Egypt.

To be sure, untold indignities and injustices occurred during those hundreds of years in Egypt. But our tradition teaches us that the worst moment of all was when our ancestors ceased hoping that one day they might become free. Hope, Reb Nakhman of Breslov insisted, is an absolute obligation. One may never give it up!

I have been a hopeful person my entire life. Yes, it began with my hopes for certain birthday presents and school-night jaunts to the ice cream shop. But in time, my hopeful appetite for gifts focused less and less on me, and more and more on the world around me. To this day, you can throw a whole mess of disappointments my way – Ferguson, Malaysia and AirAsia Airlines, Ebola, ISIS and, yes, Charlie Hebdo in Paris – drop them all on humanity and I’ll still have faith that things will get better.

George Carlin once quipped, “Scratch a cynic and you’ll find a disappointed idealist.” Well, I’m not so sure. I loved George Carlin. And God knows, I’ve had my share of disappointment. But my ideals are still intact. And in the face of this week’s tragedy – now two of them – in Paris, I hope your ideals will remain intact too. I will never condemn Islam for Muslim terrorism. I hold those individuals responsible. I hold their sponsoring organizations responsible. But Islam? I think it’s contributed greatly to the welfare of human civilization – check out the Golden Age of Spain – and I think it will contribute greatly in the future.

In March, we will welcome to Woodlands Dr. Mahjabeen Hassan, a reconstructive and aesthetic plastic surgeon, and an active Muslim here in Westchester. Dr. Hassan will teach us about Islam. Using the imagery of her profession, Dr. Hassan, in an interview with our very own Gary Stern described the human family by saying, “I take up the skin and look inside. I see that we truly are all the same. I believe you can have multiple paths to (God and that while) we have different religions, we are talking about the same thing.” [Gary Stern, “Doctor Who Is Muslim Becomes Ambassador for Her Faith,” lohud.com, Sep 4, 2011.]

Much moreso than the acts of cowards who would hurt innocents in Paris, it is the work of a doctor dedicated to caring for the flesh and spirit of our communities that affects me. Yes, she strengthens my hope. 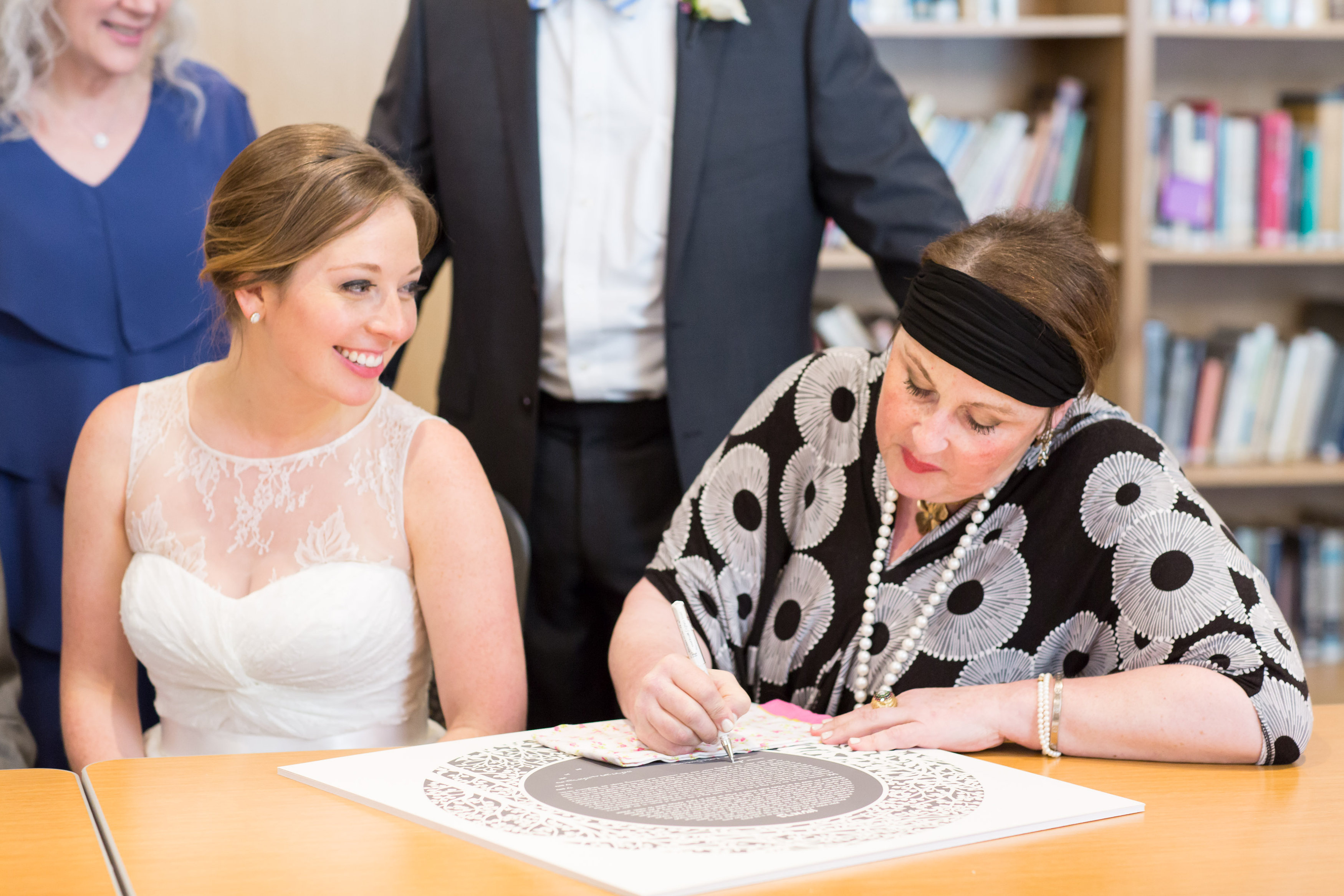 Yesterday, a dear friend of mine, a friend for thirty-three years, lost her battle with cancer. Susan Sirkman, here signing my daughter’s ketubah this past summer, fought valiantly. [I have to add here, post-funeral, that Susan hated being defined as “fighting cancer.” At the funeral, her husband quoted her as often saying, “I’m not fighting cancer, not battling a disease. I’m not being courageous in my struggle. I hate this, all of it!  I’m just trying to live, to keep doing the things I love with the people I love.”] Her spirit, in health and in sickness, was so powerful, so vibrant, so kind and giving. She was exactly the kind of person whose death would cause one to cry out, “Why her, God? What kind of God would do this to a person like her?” But, just as with my son Jonah, I know that life’s a gamble. We give it our best (hopefully) and take our chances. We hope. We hope we won’t get sick. We hope we won’t get run over. We hope we’ll win the statistical lottery which, even though it is overwhelmingly in our favor that we’ll live pretty good lives, when even one person we care about is taken from us, our morale can sink. 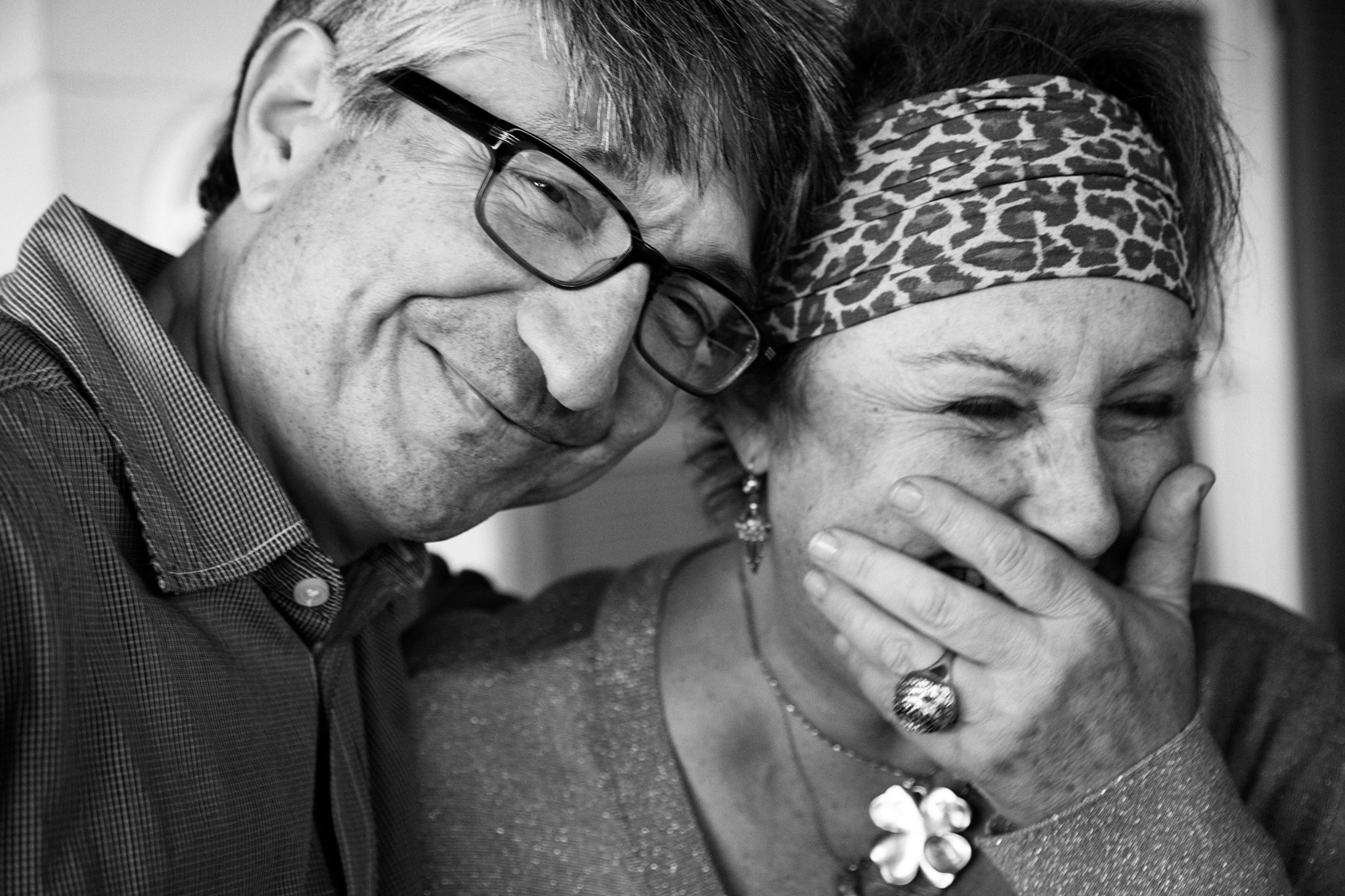 But Susan lived a great life. She loved a wonderful man, my pal, Uncle Jeffrey, who you might know as Rabbi Jeff Sirkman of Larchmont Temple. She raised four incredible children. Got herself a daughter-in-law. She gave of herself to everyone she met, and she left her world in better shape than she found it. Yes, fifty-five years is far too few. But I will say goodbye to her this Sunday morning thankful that she was here, grateful that the world got to have her in it. She may have died young but, overwhelmingly, I feel the joy of sharing my life with her these past three decades.